RaeAnne Harper is a 24-year-old Youth Champion from the Lloydminster Native Friendship Centre in Lloydminster, Saskatchewan. She exhibits strong leadership skills, volunteerism, and is a positive role model in her community! RaeAnne Harper is a Plains Cree Indigenous woman with Métis roots from Onion Lake Cree Nation Saskatchewan in Treaty Six Territory. She is currently living in Edmonton, Alberta studying with the faculty of Native Studies at the University of Alberta. RaeAnne is the current Aboriginal Youth Council President of the National Aboriginal Youth Council (AYC) for the National Association of Friendship Centres (NAFC), she was elected to the role in July 2017.

RaeAnne’s leadership journey began at her local Friendship Centre, first as a participant, and then as a staff member, growing into political representative positions. She has gained a wide variety of skills from the various seats she’s had the privilege to sit on at the local, provincial and national levels. She is hoping to work as a liaison between Indigenous and non-Indigenous people or continue working in non-profit centres and organizations.

When asked about her role as a youth leader in addressing violence against Indigenous women and girls RaeAnne stated, “I address violence against women and young girls by saying something when I see something, or someone being mistreated. I always express the importance of respecting women and recognizing the successes they achieve. Women are our leaders in the homelands and in our everyday lives, sometimes we don’t even realize it.” 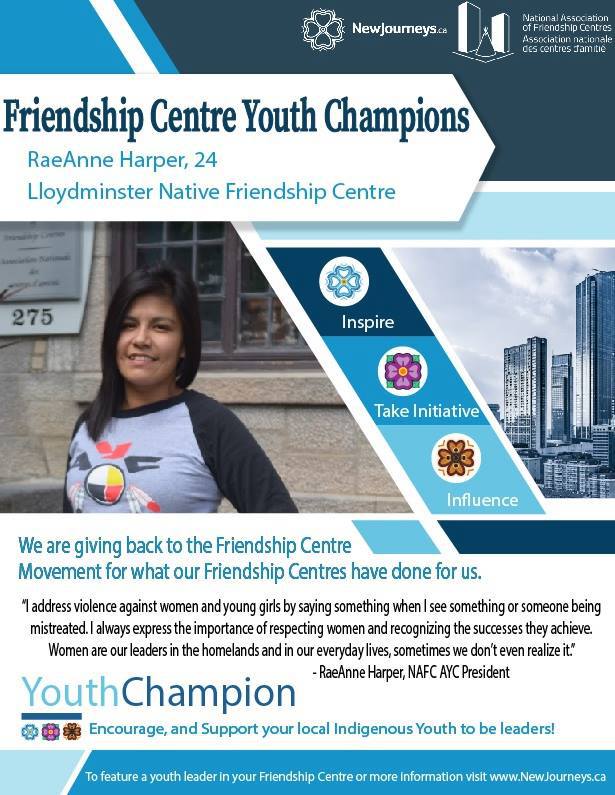