'It was the biggest victory of my life'

Aalayna Spence is doing something no one has ever done before.

Spence, from Nelson House, is a transgender woman who competed in Treaty Days competitions across the north in August.

Spence began her transition from male to female in 2013. Singing was a life saver and helped her through times of difficulty and depression.

At first, she wasn’t going to be allowed to perform in the competitions because organizers didn’t know what category she fit in. Her ID said male and she wanted to compete in the female category.

"I essentially felt that I was being denied my right to sing and sing where I felt comfortable,” Spence said.

A lot of people in First Nations communities don’t understand what beings transgender means, she told the CBC.

Eventually, with the help of her HR specialist, Norway House and Cross Lake agreed she could compete in the female category at the communties’ talent shows. 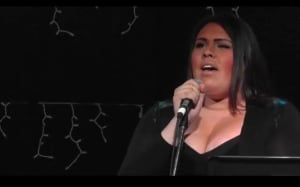 "I felt on top of the world. It was a small victory; but for me it was the biggest victory of my life," Spence said.

"As hard as it is, I believe my mission in life [is] to bring forth a generation of acceptance and tolerance for everybody. Not just for the LGBT community, but for everybody."

What can we do to educate ourselves and others about the experiences of our transgeder friends and family members?