Within a few months in Winnipeg and without any warning, I found myself in a situation with life changing circumstances. Because of my proximity and involvement in the alcohol and drug world in a new and strange environment, on my way home one evening, I was brutally assaulted by six gang members well known in the city. I woke up in the hospital, with no recollection how I got there and unable to see. I later found out I had four surgeries to my left eye which was eventually enucleated and had to be fitted with a prosthetic eye.

I spent about a month in two different hospitals throughout this ordeal, with no one ever knowing where I was or what had happened to me.

Going through the ordeal was really surreal for me. It was like it didn’t really happen. The thoughts and images racing through my mind were scary, frightening and at times explosive to me. All I thought about was the fear of getting assaulted again by those people, would they recognize me, do they know where I live, were they going to kill me. I thought about my kids, family and friends and began worrying about their safety and lives. Especially when I came out of a week drug-induced coma and was unaware of my left eye gone, due to the bandages wrapped around my head, and not getting told what had happened to me, until two weeks later.

It was here I felt truly alone and for the first time in my life genuinely afraid of my future and well-being. Never knowing why it happened or why it had occurred to me. I was left wondering with the questions, “Why me?” and “What did I do to deserve this?” Blaming everyone around me, thinking it was their fault and they were to blame for my misfortunes. 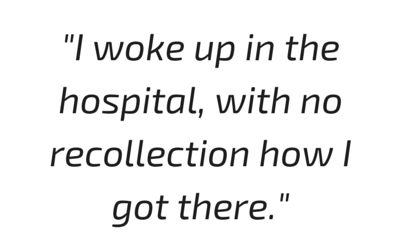 During my hospitalization for this short time I became a person unknown to myself to the point of isolating myself from the world and my family and friends. Early on I spent time alone crying, eventually becoming suicidal from being depressed. When I was not doing this, I was constantly sleeping all day and refused to do my daily living activities. Being diagnosed with Post-Traumatic Stress Disorder, depression and insomnia from my hospitalization, I could not leave my house unless I had two or three people with me, my neighbors would mostly do my grocery shopping, and when I did leave my house it was only to go to my counseling sessions or doctor’s appointments. It was through this experience, I was forced to take a good look at myself. I soon found myself trying desperately to regain control of my life.

Kelly and her kids, Arn and Mary.

Here I was a 30 year old woman, no job, no education, no future as I looked from the outside in, wishing I had the things everyone else had in life. Not realizing I had the tools to help myself if I had just looked in the right places and asked for help along the way. As I stand here today and now realize why I never saw any of this? It was because I was not ready to see it and did not want any help from no one, as I thought nobody cared about me.

Her four part story on A4W Live will conclude tomorrow.