Decades ago, Mary Greyeyes-Reid made a place for herself where no Indigenous woman had been, and where few women in general were treading.

Despite making history, she was a glaring example of how Canada treated First Nations people at the time.

In 1942 Greyeyes-Reid was the first Indigenous woman to join the Canadian Armed Forces. She was from the Muskeg Lake Cree Nation in Saskatchewan, joined the Canadian Women’s Army Corp at age 20 and served in World War II.

Greyeyes-Reid became the centre of some public interest, and a bit of confusion, with a photo of her in a Canadian Forces uniform, appearing to be blessed by a First Nations chief. The photo sits in the Library and Archives Canada and is titled “Mary Greyeyes being blessed by her native Chief prior to leaving for service in the CWAC.”

The picture became famous, photographic evidence that Canada and all its people, even its First Peoples, were rallying behind the motherland and fighting for King and country. When Greyes-Reid was in London for the war, she met King George VI, the Queen Mother and Princess Elizabeth (now Queen Elizabeth). 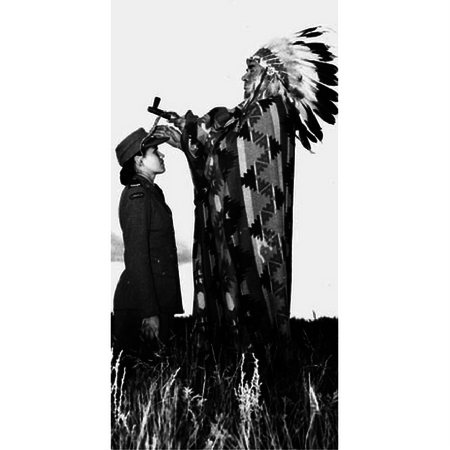 The story of how the photo came to be, though, contradicts one told by her daughter-in-law, Melanie Fahlman Reid. According to Fahlman Reid, the photo was staged; the uniform was provided by the RCMP and the chief in the photo wasn’t yet a chief. His name was Harry Bull and he was a councillor of a reserve (not Greyeyes-Reid’s) and only became a chief later. The two also did not know each other at the time. They were both compensated for their time—Bull was given $20 and Greyeyes-Reid was given a good lunch.

“The regalia that he's wearing was cobbled together by the Mounties,” Fahlman Reid explained in the Tyee. “They went into people's houses and pulled out a blanket here, an old headdress from a powwow there. And they found a pipe. The stem on it was pieced together with some tape and a bit of twine one of the Mounties had.”

She added: “And they told them to pose. And this picture is apparently an Indian princess getting a blessing from the chief of her tribe.”

Read Fahlman-Reid’s telling of the event in full here.