Downie performs songs from his album Secret Path for the first time at the Basement Revue show on December 18, 2014
Share This

In December 2014, Gord Downie performed two songs from his album Secret Path about the short life of Chanie “Charlie” Wenjack. Chanie was a First Nations boy who escaped residential school in 1966 and died from exposure as he tried to make his way back to his reserve in northern Ontario.

In the time since Downie, frontman of the beloved Canadian band the Tragically Hip and considered a legendary creative force by many, recorded the album Secret Path, he was diagnosed with terminal brain cancer. In a statement about the album, Downie noted that he’s trying in a small way to help Canadians know about the country’s past and that the residential school system, and its ongoing effects, is a Canadian problem, not just an Aboriginal problem.

“Chanie haunts me,” Downie added. “His story is Canada’s story.”

Watch Downie perform the song “Secret Path” from his appearance at the Basement Revue about missing and murdered Indigenous women on December 18, 2014.

Secret Path and its accompanying graphic novel by Jeff Lemire are available October 18. 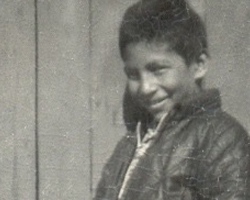 A look at the life of the young boy from Ogoki Post, Ontario