Over the coming months, New Journeys will bring you exclusive videos of performances by Joseph Boyden, Leanne Simpson, ATCR and many others
Share This

A star-studded lineup of talent in Canadian music and literature came together one December night for a special edition of the Basement Revue to raise awareness about a cause close to many of our hearts.

Basement Revue shows bring together musicians, dancers, writers, poets and artists to one space, for one night only. Performers aren't announced before the event, so audiences come with a simple expectation: to witness something unique, powerful and often beautiful.

On December 18, 2014 at Toronto’s Opera House, the Basement Revue audience witnessed exactly that, and more.

Many in attendance were unaware that the show was put together to highlight missing and murdered Indigenous women and to help raise money for No More Silence, and that well-known names such as Joseph Boyden, A Tribe Called Red, Gord Downie, Jennifer Castle, Lee Maracle and others were all set to take the stage that night.

What they witnessed was an incredible opportunity for different groups to communicate, share experiences, express themselves artistically and politically and to listen to each other. These are all important elements in building relationships and communities.

Over the coming months, New Journeys will release exclusive Basement Revue content—videos of all of the performances that aren’t available anywhere else. This way, everyone will be able to experience the power of that night and see the many incredible ways artistic expression can help us on the path towards reconciliation in Canada.

Rogers stood side stage most of the evening and watched the entire show unfold. She told New Journeys that night was like nothing she’d ever been a part of.

We hope it does too. 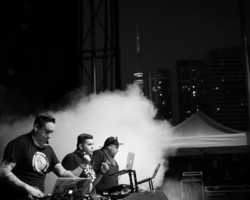 ATCR team up with Buffy Sainte-Marie