Is it 'business as usual' with Muskrat Falls?

Delilah Saunders, one of three on a hunger strike last year, gives an update on the Muskrat Falls situation
Share This

Since October 16, 2016, more than 57 people have been in and out of the provincial court of Newfoundland and Labrador and Supreme Court of Canada on criminal and civil charges for protecting the health of the land, water, wildlife and people of Labrador.

The threat of methyl-mercury is not new information to Nalcor Energy, the company building the Muskrat Falls megaproject, and the provincial and federal governments. Along with two fellow Inuit, I went on a hunger strike that lasted nearly two weeks to demand that Nalcor and the provincial government commit to #MakeMuskratRight after a Harvard study showed that the mega-hydroelectric dam project posed a serious threat to the food chain in the form of bioaccumulation of methyl-mercury. The land and the sustenance it provides is a main staple for many living in the area. Also under attack is the culture and tradition that has been essential to the survival and well-being of Indigenous and non-Indigenous Labradorians for thousands of years.

The hunger strike ultimately forced Indigenous leaders from Nunatsiavut Government, Innu Nation and NunatuKavut Community Council and Premier of Newfoundland and Labrador (who also holds the title of minister of Labrador and Aboriginal Affairs), Dwight Ball, to meet and discuss our demands. They ultimately agreed to the four demands we tabled, which were:

1. An evidence-based approach supported by peer-reviewed science to mitigate human health concerns related to methyl-mercury as a result of the Muskrat Falls Project.

2. An independent assessment of the necessity of the first phase flooding based on Nalcor's science and engineering reports. If flooding is necessary flooding height and duration is kept to a minimum. First phase flooding will be used to help inform second phase of flooding.

3. The removal of soil to minimize methyl-mercury production as identified by independent scientific research during second phase impoundment.

4. A commitment from the Federal Government that it will fulfill its regulatory and compliance obligations related to the project and actively participate in an integrated monitoring program.

Leading into summer, there was no progress on the demands we put forth.

The only action that has transpired from these demands came long after the set deadlines and when the arrests of multiple land and water protectors garnered national attention.

Inuk grandmother, Beatrice Hunter, was jailed on May 29 for stating she wouldn't promise to stop protecting Labrador against Nalcor and the Muskrat Falls project. She was held for 10 days in the dilapidated men's medium-maximum security prison, Her Majesty's Penitentiary, in St. John's, Newfoundland.

Inuk elder, Jim Learning, Marjorie Flowers and Eldred Davis were all jailed on July 21 and also held for 10 days at Her Majesty's Penitentiary. Five senators penned a letter that called upon Premier Ball to release the three jailed protectors. Flowers and Learning are under house arrest for declining to sign an undertaking. Davis signed the undertaking and is allowed at the peace camp, but not across the road at the gate to the Muskrat Falls mega-dam site. The three are due in court in late August.

Last week, various Labrador land and water protectors and I met with staff of the Federal Minister of Natural Resources, James Gordon Carr. They began the meeting by stating that nothing is more important to this government than reconciliation and implementing the United Nations Declaration of the Rights of Indigenous Peoples (UNDRIP). After nearly a year, the Labrador Land Protectors have heard nothing of the demands. In this meeting, it was brought to our attention that the Independent Expert Advisory Committee, made up of representatives of the three Indigenous organizations and the three levels of government, was fully formed. However, no traditional knowledge keepers were appointed.

As mentioned earlier, the threat of methyl-mercury is not unknown to government. However, the federal government proceeded with approving a second loan guarantee without the consultation of the Indigenous leaders despite the presentation of the Harvard University study outlining the dangers of methyl-mercury specific to this project. We tabled the Harvard study again at this meeting, which they said they were familiar with. Their justification for poisoning the people of Labrador was that they are working on reducing coal consumption in Nova Scotia specifically, a peculiar and hypocritical statement considering Nova Scotia is opening a new coal burning power plant.

The Supreme Court decision to end seismic testing Clyde River in Nunavut shows promise for a resolution at Muskrat Falls, but time is of the essence and things are rapidly developing. Hundreds of RCMP officers were flown to Happy Valley – Goose Bay, a town of 7,500, to ensure the safe delivery of transformers to the Muskrat Falls site.

These don't appear to be the actions of a country whose priorities lie on the path to reconciliation and the implementation of UNDRIP.

As I write this post, news of elder Jim Learning being arrested for allegedly breaking his house arrest order is circulating. Officers went to check on him on August 8 after his recreation hour had ended. Learning, who is battling cancer, was sleeping and didn't answer the door. They scoured the town and peace camp in search of Learning with no luck. The authorities arrested the 79-year-old at his Labrador home where he was resting.

It's hard to say what's to come in the fall, but concerns are growing. Worries are that the Independent Expert Advisory Committee is a pacifier that will consume the time and energy of the Protectors as Nalcor and the government carry on with "business as usual" and the rights of Indigenous peoples are ignored. 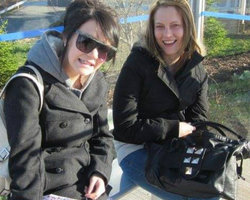 Delilah Saunders on the death of her sister, Loretta 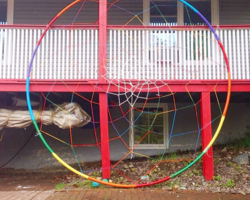 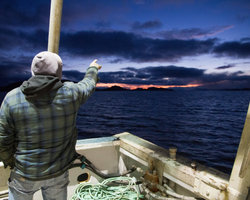 The Muskrat Falls debate isn't over but after a tense conflict is heading in the right direction, says Andrea Andersen