The dark side of peer pressure

TipToenNMaJrdns on why caving in isn't worth it
Share This

You tell yourself before you leave the house that you’re not going to drink tonight. You promised your friends you would be the DD. You swore “only one drink!” but the minute you walk into the party, everything changes.

I think our friends sometimes don’t even realize they’re doing it, and they think “just take a shot” is harmless. But it’s really not. My friends will brag about how high or drunk they got last weekend, and boast about how amazing that bong hit was or how fast that Whiskey hit them. They make it out like if you’re not drinking or getting high that you’re lame.

You know what? I know I’m not lame if I’m not drinking or getting high. I’ve seen people die from it. Now THAT’s lame.

Sometimes when I’m surrounded by people, friends or not, they can talk me into doing things I don’t want to do. I remember my first time getting drunk was because of peer pressure. I was at a New Years party, hanging out with my girlfriends, when a giant group of people walked in. We only expected about 20 people to show up, but there was about 130 by the end of the night. I had never been in a room with so many people who were so hammered. 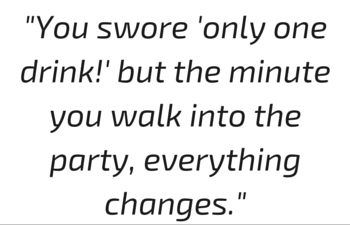 Somebody gave me a drink and they told me to drink it. I was hesitant and scared, but I contemplated doing it to impress my new friends. They were all chanting “drink! drink! drink!” I refused a few times but I got called a “pussy,” so I drank it. I don’t know what was in that drink, but I kept drinking more. People kept shoving beer cans and coolers in my face and I took them and drank them. Biggest regret of my life. I luckily didn’t do anything embarrassing, but I felt like crap the next morning.

Moral of the story, you don’t have to do anything you don’t want to do.

It doesn’t matter who is making you do it, if you don’t want to drink or smoke or get high, don’t do it. It’s not worth it, trust me. Standing your ground shows that you have respect for yourself and your boundaries, and characteristics like that in the long run are those that others look up to.

If you’re in a peer pressure situation, just walk away and leave. You’ll thank yourself for it.